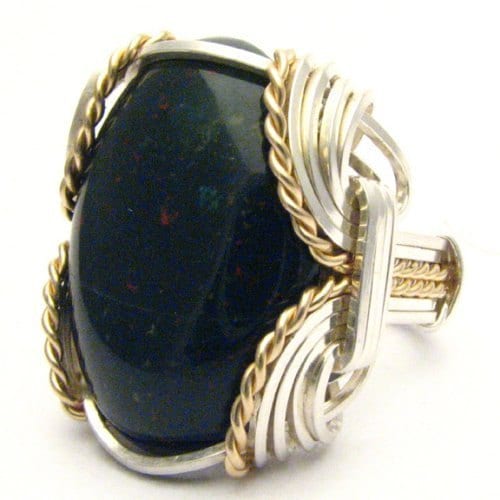 Bloodstone has a unique appearance and symbolic name. This deep green opaque chalcedony has red or reddish brown spots resembling drops of blood. From which it gets its name. The question is: To whose blood does it refer?

A source of stories

Without knowing about the stone’s relationship to Christianity, the name “bloodstone” makes perfect sense. It’s an exact description. But here in the West, many people associate the gemstone with lore from the Middle Ages. The story arose that at the crucifixion, the blood of Jesus fell on the dark green earth, turning it to stone. A second version says that the blood from the fatal spear thrust fell on green jasper at the base of the cross, creating this beautiful stone.

However meaningful this story, bloodstone has played a part in our lives for 5,000 years. Humans first encountered it in Mesopotamia circa 3,000 BCE. People carved it into amulets that ancient warriors then carried into battle to stop wounds from bleeding. Later in the same region, the Babylonians engraved the stone to interpret omens and foretell the future.

Ancient Egypt also had great faith in bloodstone. They believed it could magically defeat enemies by giving warriors great strength and make them invisible. That’s not a bad trick for avoiding an attack.

Through the ages, bloodstone jewelry has enjoyed great popularity. Take a look at these two antique rings from Lang Antiques, one of our customers.

The stone is chalcedony, microcrystalline quartz meaning that the crystals are too tiny to see with the unaided eye. The mineral chlorite gives bloodstone its green color while iron oxide and hematite impurities create the spots. Its opacity comes from dense inclusions of silicate minerals.

Women choose the stone either for its symbolic meaning or its mystical powers. Both yellow and rose gold provide a rich setting. And it’s a natural choice for men especially if a customer is looking for a March birthstone. We feature calibrated bloodstone in numerous sizes and the four most popular shapes: round, oval, emerald, and rectangular. 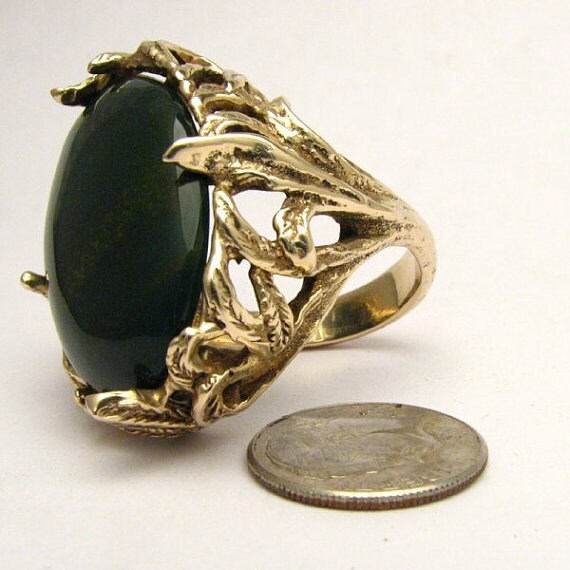 Power up with Bloodstone

We’ve already talked about some of bloodstone’s mysterious forces, but this gemstone has more to offer. Anyone of us would appreciate these gifts, and I particularly love the last three. Bloodstone imparts — 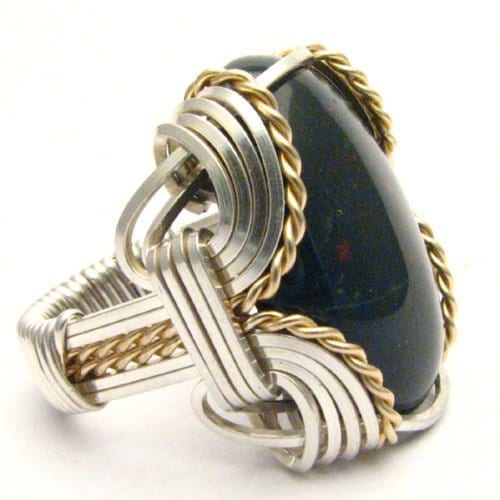